Sometimes you gotta be bold

Uh what you wanna be

Hey shake that boogie up

Shake shake that boogie up

Hey shake that boogie up

Shake shake that boogie up

jom deo sinnage Turn it on

Now everybody dance all night

You and me in the moonlight

If you wanna have some fun

Let’s dance the night away

[BAEKHYUN/CHEN] Let’s dance the night away

[CHEN/XIUMIN] Let’s dance the night away

Dance the night away

Let’s dance the night away (Whoo)

Dance the night away

[CHANYEOL/SUHO] Let’s dance the night away

You and me in this cool night

If you wanna have some fun

Let’s dance the night away (Ho)

[D.O./LAY] Let’s dance the night away

[CHANYEOL/SUHO] Let’s dance the night away

[CHEN/LAY] Let’s dance the night away

[BAEKHYUN/SUHO] Let’s dance the night away

Let’s dance the night away

NOTE: “Love And Boys” is originally titled as “Love And Girls”.

nani matteru no What you waiting for

And let me break it down

You want it take it kono ressha no Ticket

watashitachi to Go for it

Guess what’s Christmas for you? We know that Christmas usually have gifts, foods, vacation in the place that you want to go, among others however Christmas is really about the birth of our LORD Jesus Christ which also the meaning of LOVE (when I watched the children’s musicale in our church, seriously it’s true), it’s not just a story it’s a real life situation. Christmas is also a special day that we could spend time with our family and love ones.

I’ll admit that I want an early Christmas gift this 2018 beside those I mentioned there, that’s why I asked again my father to bought a Christmas gift on December 11, 2018, and he thumbs up unanimously (special shout out to my FATHER) then he let me to use his credit card again. I ordered two Kpop albums in Ktown4u again because Ktown4u have many good reviews like what I said in my first review there (https://chaekayeon0908.wordpress.com/2018/11/13/the-albums-are-arrived/ ), that’s why there’s good results again for that on time for letting my orders arrived on-time.

Why? It’s because they’re not just only served those albums as repackage album but it’s also serve as their 2018 Winter/Christmas album too, so that this is the early Christmas gift for EXO-Ls and ONCEs all across the globe and will give more quality music just in time for the Christmas season! I wanna give a special shout out also to EXO-Ls, ONCEs and the whole TWICEXO NATION (those ones are stanning and shipping both EXO and Twice respectively)!

My shipping method is the same as I ordered for the first time which is none other than EMS, I prefer this because they delivered faster and this is the shipping method that I will only trusted ever when I order Kpop albums!

From “PREPARING ITEM” to “READY TO SHIP” statuses timeline:
* December 13, 2018 – Twice‘s The Year Of Yes (around past 12nn MNL time), one day after Twice’s digital music release on December 12, 2018 and this day also marks their first day of physical album release
* December 13, 2018 – EXO‘s Love Shot (around past 12:30pm MNL time), four to five hours before EXO’s digital music release by 5pm MNL time (6pm Korea time)
NOTE: Those albums that I ordered have “READY TO SHIP” statuses simultaneously, what a wonderful day and it’s really interesting!

Last December 14, 2018, I just got a notification from Ktown4u through my Gmail that those albums that I ordered are now “SHIPPED OUT” around almost 6pm MNL time, however they can’t shipped out those beyond that time due that the couriers and post offices are CLOSED by 5pm MNL time (6pm Korea time) as well that they only shipped out every weekdays only. That’s why I tracked my packaged first then there’s no updates from that day till December 16, 2018.

On December 17, 2018, which also concurrent with Miss Universe 2018 coronation day, I still tracking my package in the early morning however there’s no updates yet but I stay optimistic for that. I enjoy first the Miss Universe 2018 first in our home but we continued on the car through listening at 102.7 Star FM (one of the FM radio stations in the Philippines) via Bombo Radyo News nung paalis na kami ng bahay around 10:30am MNL time (11:30am Korea time) kasi may important matter na inaasikaso yung mga magulang ko with my older brother of course. When we traveled, we’re around in Quirino Highway when I heard the announcement of the newly crowned Miss Universe which I’m nervous if this is the end of Philippines’ streak for the Grand Slam pageants or not, but I’m relieved along with my parents and my brother when they announced that our representative Catriona Gray is the newly crowned Miss Universe, which means that’s 6-year streak for the Philippines for winning the crown on any of the Grand Slam pageants, this is really a blessing from God and also an early Christmas gift for the Philippines, coincidentally back in 2015 when Pia Wurtzbach won Miss Universe crown too for the Philippines. When I went to school around 4pm MNL time, when I open my computer, dun ko na lang nalaman na ready nang lumipad yung package ko sa Pilipinas around 12nn MNL time earlier (one and a half hours after Catriona’s win in Miss Universe 2018), double blessings that gave to me from God that day. The full timeline with my package are the following: 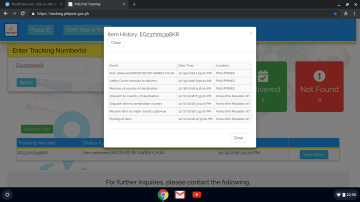 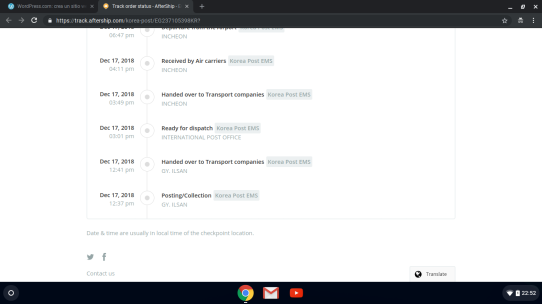 
I’m more happy than ever before, my package is always door-to-door due that PHLPOST are always kindly everywhere despite their mistakes, it’s such a wonderful blessing this Christmas! It took for 8 days (7 days less than the first time that I order as you could see on my first Kpop album review article earlier on this article) to process my order before those albums went to ours, when you include only the “SHIPPED OUT” days then it took only for 3 days (not include the weekends, but if you include the weekends it’s 5 days), finally the MAIN EVENT of the day is here.

* FIRST in the line always is the STORAGE FEE RECEIPT 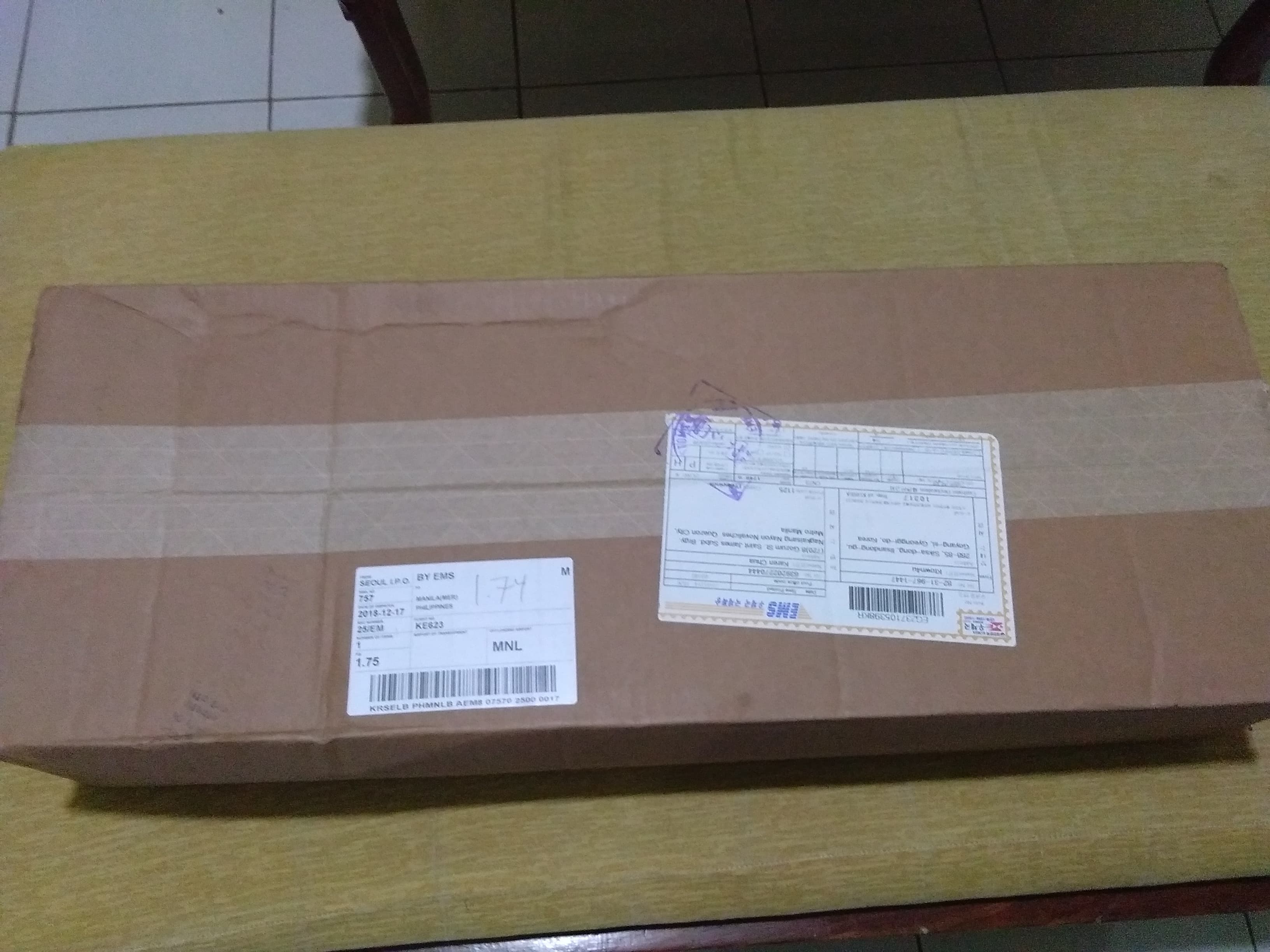 * When I opened the PACKAGE, there’s the INVOICE of course

* MERRY MERRY CHRISTMAS, folks! Those albums are finally in our hands, just in time for the Christmas season, it’s more than a gift actually! 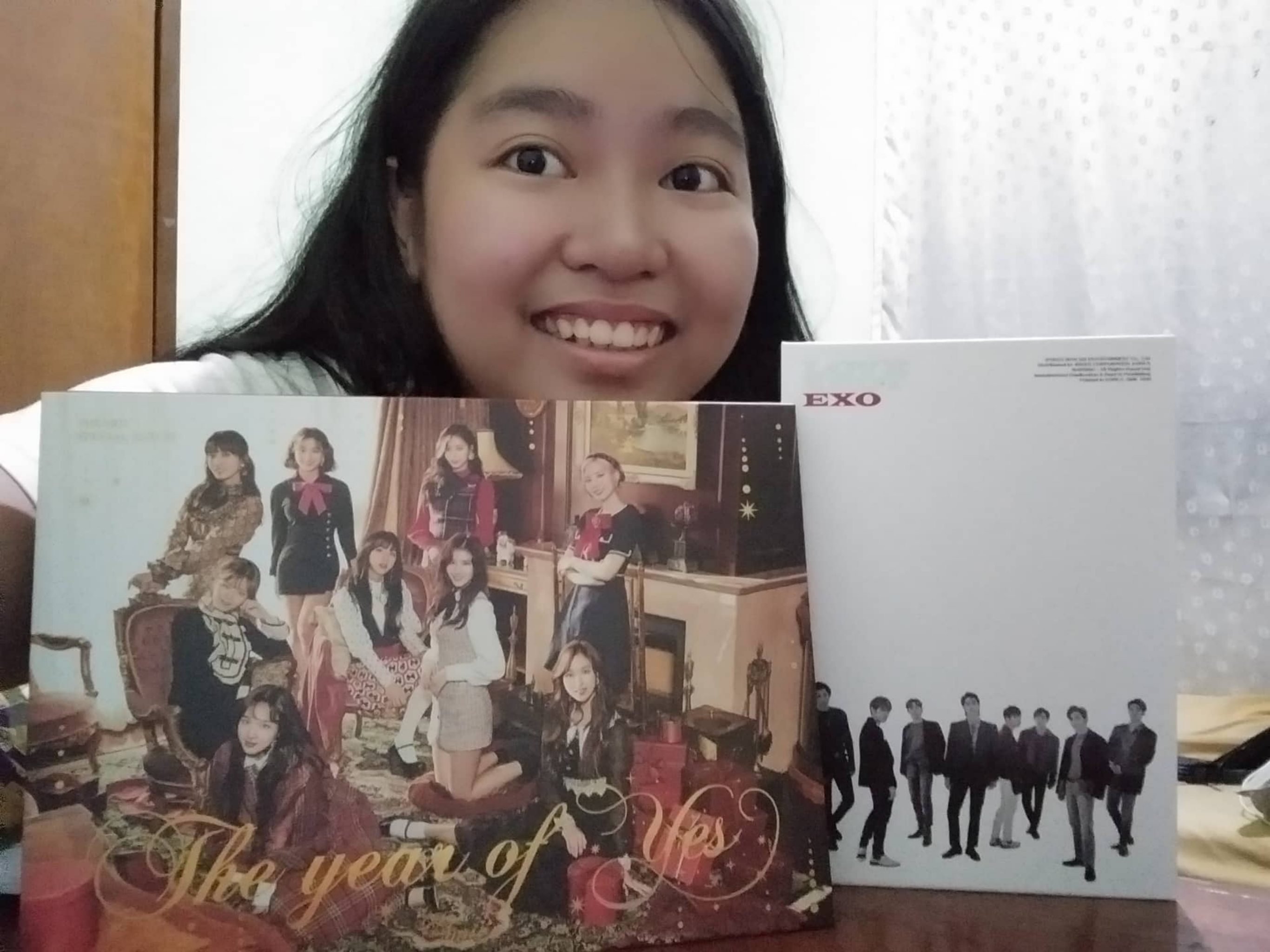 * Ladies first of course, this is Twice‘s The Year Of Yes (Yes Or Yes – The 6th Korean Unified Extended Play Repackage and Winter Album 2018)

The Year Of Yes have the same tracklist as the original one Yes Or Yes, however there’s two new songs, the Korean version of Be As One (originally from BDZ, their 1st Japanese full length album) and the main title track which is The Best Thing I Ever Did, you must listen to these! That album I got is the A version of course!


PHOTOCARD/S: I got three special photocards, 1 for Sana, 1 for Jihyo and 1 for Mina. And there’s a surprise, I got the set of regular photocards which contains all 9 Twice members photocards and a group photocard, however it’s only available in the pre-order period when you got pre-order benefits.
OTHER FREEBIES: a QR code card (I got the no. 2 which you could see on this video link that I provide: https://www.youtube.com/watch?v=fpV4WfGZYh4 and special shout out plus credits to galaxioputra for this), a sticker (which I got Chaeyoung)
CD-R: Momo cover
POSTER: Actually this is my first time that I order to include the posters and other pre-order benefits not because I want that but because I really want that this Christmas will be more complete! Remember, the posters of this album are only available in the pre-order period, guys. This album have two versions of posters, however this is not random actually, and this is the poster that I got:

* Then finally the moment of truth that you waiting for, here’s EXO‘s Love Shot (Don’t Mess Up My Tempo – The 5th Korean-Chinese Unified Full Length Album Repackage and Winter Album 2018) 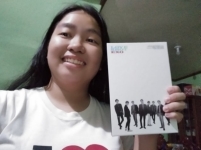 Love Shot also have the same tracklist as the original one Don’t Mess Up My Tempo, however there’s four new tracks on the line, the Christmas ballad song Wait, the dance song Trauma, and finally the title track Love Shot which recorded in Korean and Mandarin Chinese versions, EXO is really on fire! The version that I got is the SHOT version, where all of Korean Line EXO members is in the cover there (sadly the only Chinese member Lay isn’t present for the Love Shot promotions), let me clarify for those were confused that there’s Korean and English versions of the album covers, it’s still two versions: LOVE and SHOT, however the Korean and English thing is the booklets actually which contain both the Korean and English languages in every booklet per version. 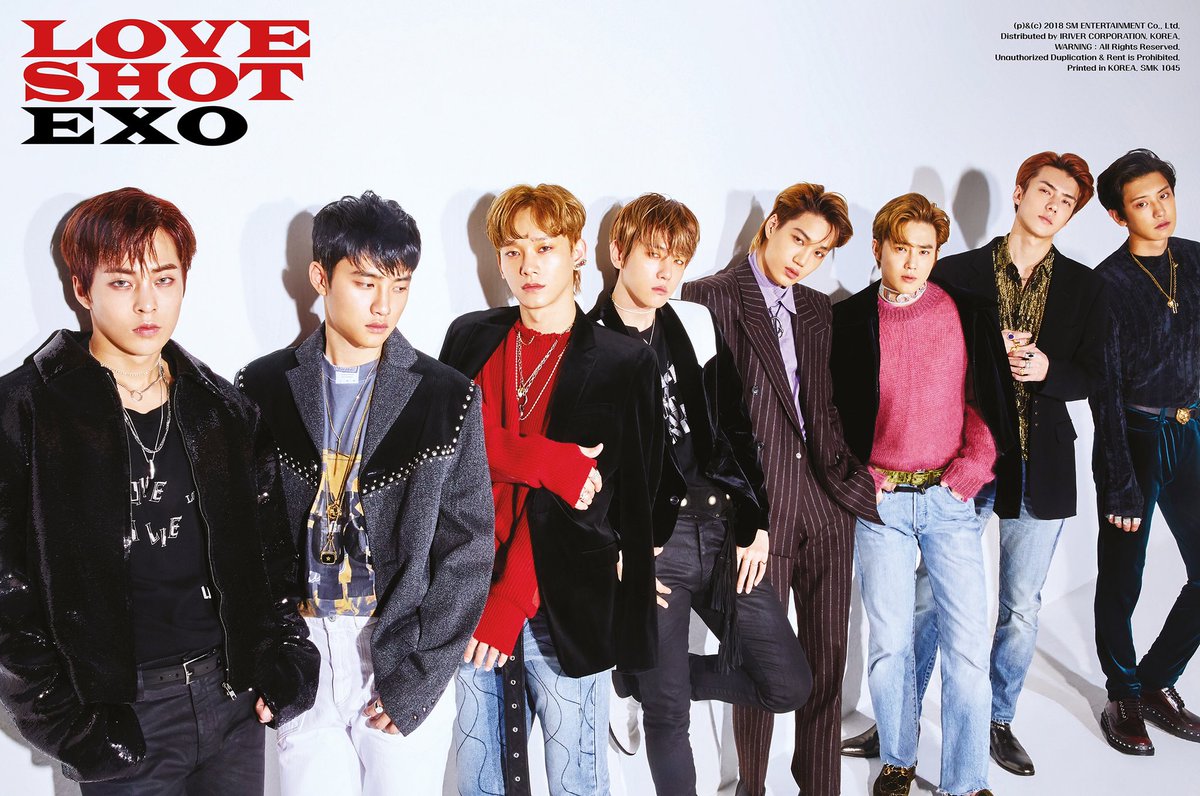 Thank you again to Ktown4u, EMS, Korea Post, Bureau Of Customs and PHLPOST for having a wonderful day this Christmas season, I wish that all of you will stay strong, good health always, take care your families and love ones this Christmas season, pray everyday don’t forget and we could celebrate the day when Jesus was born! Have a wonderful MERRY CHRISTMAS and looking forward to 2019, to God be the glory! 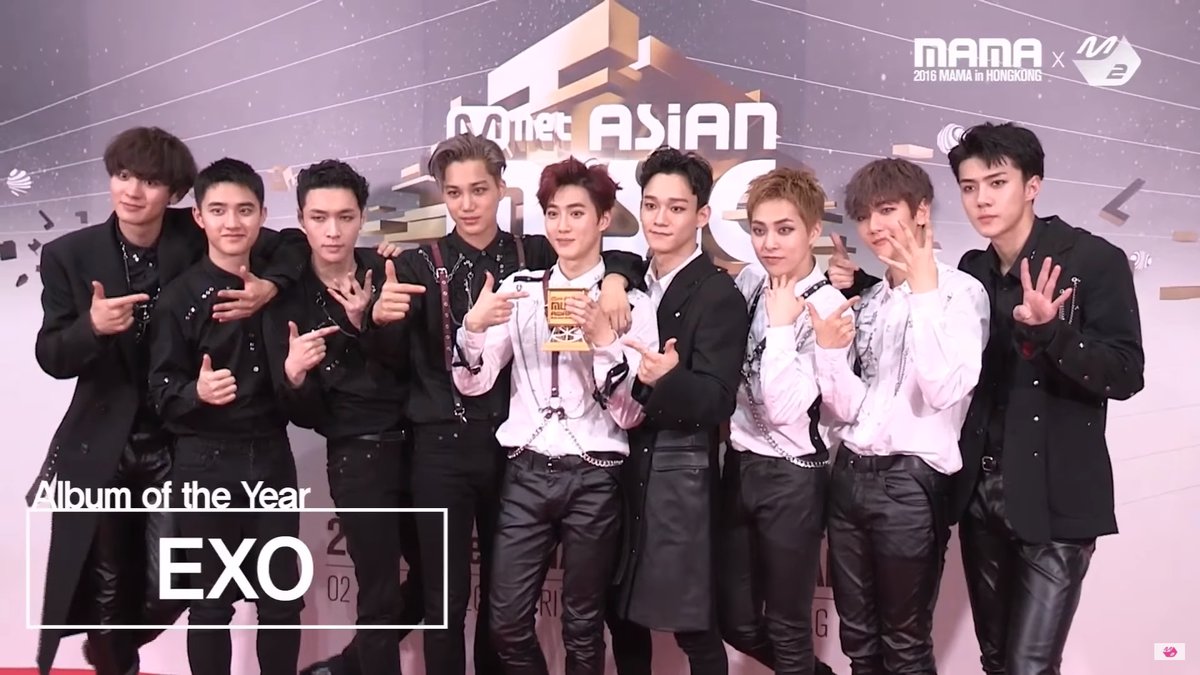 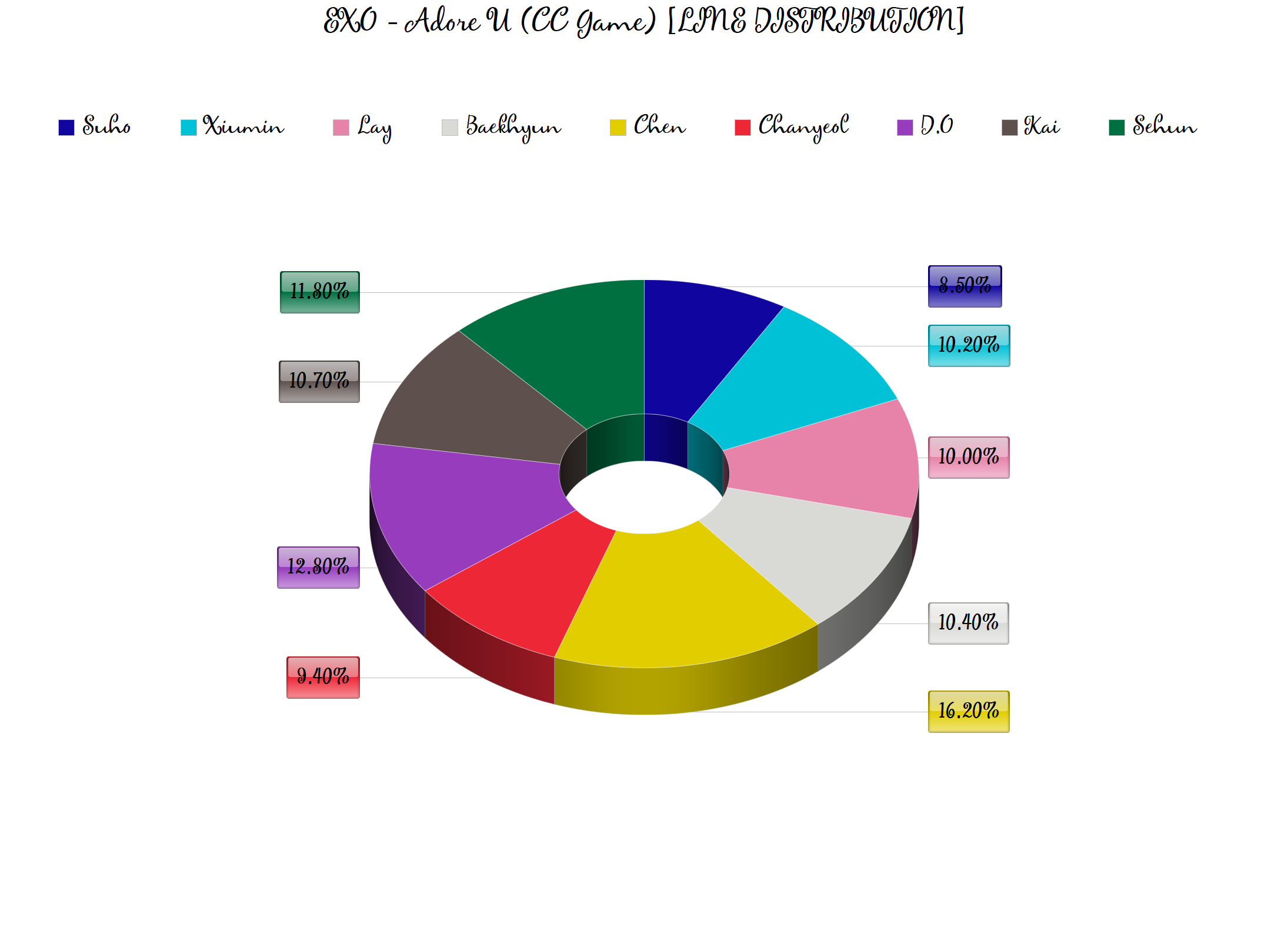